Raising Chicks on the nest

Some ideas for letting the parent emu raise their chicks

If you are considering letting your emu rear their chicks themselves then you might find some useful information here. If you would like to let your males sit but then remove the eggs at the end of the sit then some of this information may also be useful. It is always worth letting your males sit on their nest if they would like to, as it helps them break out of the season, and helps them to feel as if they are doing their bit.
Some may argue that straw shouldn't be used for emu. If they were incubator hatched then yes, there would be other options, such as carpet or artificial grass, but when outdoors straw will do the job well and keep dad and the chicks warm. The dads also like lots of material around them when the chicks hatch, as they are constantly rebuilding the nest around themselves and the chicks, bringing more straw in towards them. 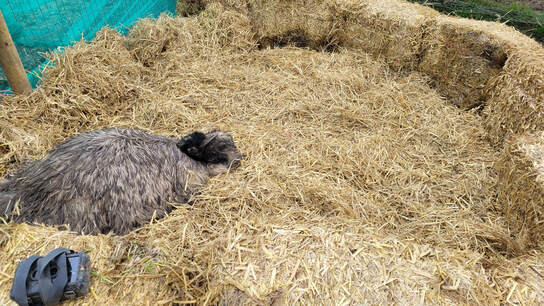 An emu dad within a straw bale nest. Putting bales around the dad will give him nesting material, it will also keep the wind from him and keep the chicks contained once they hatch.

​
​Both parents may feel threatened by human presence, as is usually the case with even the most friendly of emu, so be sure to give them lots of space and observe from afar, talking to them gently and calmly, only tending to the male and putting food and water out for the female when necessary. If you approach the male, both parents will probably scrutinise your hand movements, to make sure you are not taking the eggs from under the dad. You might even get a hiss or a nip from the dad, and the mum might circle you and drum with her head back in a threatening posture. So, be guided by their behaviour. If the parents do not feel threatened by you there is a better chance of being allowed near the chicks and the father.  Remember, you are going to need access to their pen to be able to care for them over the sit, hatch and the aftercare, so building trust with both parents is essential.
​
Dad will not eat or drink while he spends his 60 days on the nest. He will lose a bit of weight over time, but will be fine.
Once the chicks have hatched, food and water ought be put out nearby for him, so he can access it from his nest.
Before breeding season emu will eat a lot in preparation for breeding (a good ratite feed is recommended to avoid ailments such as Wry Neck in the chicks), the female needs sufficient nutrition to produce healthy eggs and the male will need to put on weight for his sit. You can find how much weight your emu is building up by putting your arms over the emu's back and feeling behind the wings for the fat build-up in this area.

He may sit on 5 to a dozen or so eggs. It seems the most common amount of eggs is around 9, more than that and they start spilling out of the sides. The dad will throw out any none viable eggs. Occasionally, one of the eggs may start to smell, quite often the dad will carry on sitting on a smelly egg. If you can get to it, and be sure you have the smelly one, then it will not explode underneath him. An exploded egg will make him really smell and may affect the other eggs, since the shells are quite porous.

The Hatch Of Emu Chicks On The Nest

The communication between emu parents and the young is fascinating to watch and hear; it is certainly the best time to observe emu sounds. The female will do lots of drumming and the male will communicate with the chicks constantly via his actions, grunts and hisses. He will hiss to warn of potential danger when they venture too far from him, and to stay away from things he feels may be of danger to them; or sometimes if they just wander too far away from the proximity of the nest. The actions of the father are really interesting too, he will do things like tapping them on the head with his beak to show them things and give them warnings.

The chicks will stay with the parents from around 5 - 18 months and with the parents present they can be released from the pen earlier than you would release young emu on their own out with other emu. Space is key here, with enough space and hiding places the chicks and their parents can be released at around 2 or 3 months old. If the mother is present she will look after the chicks and keep them protected from other emu, dad will also look out for them but the females tend to be more alert to dangers than the males. Emu outside the family may likely not hurt the young, they will be more fascinated by them than anything and will likely approach them, other males may try and adopt them, but the parents will shoo them away, usually without the need for aggression.

It is worth noting that emu brought up on the nest will not have the same friendliness that comes with incubator chicks, since they are imprinted to their parents rather than humans. This is worth keeping in mind when you come to sell them later, or you want to develop a relationship with them. You may not want to keep emu which are related to your own, and wild emu are quite hard to catch and load, it is likely that you wont be able to get anywhere near them when they are older. But it has it's pros too because emu brought up by their parents will then likely go on and be good parents themselves, and for emu lovers it is wonderful to observe the parents raise their young, and to give the emu the opportunity.

Mum with her chicks.

A few moments caught on camera